AS286/KPN International was taken over by AS3257/GTT in December 2019. AS286 will be integrated into / migrated to 3257 and fade away. Therefore some of the information found on these pages might be outdated / obsolete.

This document only applies to the KPN International IP backbone AS286.

The hereby described communities may be adjusted, altered and updated any time. Even our processes cover updates to documentation, there's no guarantee, that it's always up-to-date. In case of doubt, transit customers should contact our NOC and peers should contact peering@as286.net.

With KPN's standard blackhole community 286:66 (or IETF's 65535:666), all traffic towards the tagged prefix is blackholed / discarded everywhere (even on the PE the customer is connected to), which basically takes the host "offline". 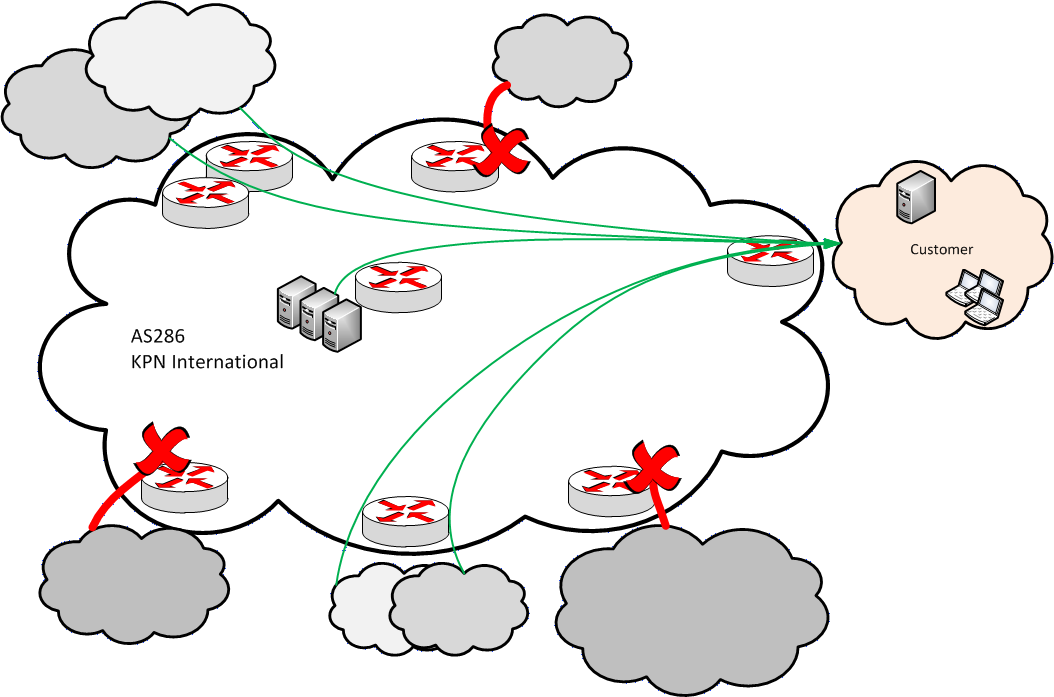 A simple example: A customer connected in The Netherlands is being (D)DOS and the (D)DOS traffic enters KPN's network in the US. With sBH/erBH communities you can "instruct" KPN's network to only blackhole traffic towards the target in the US, while European traffic is still forwarded.
Taking this a step further: if above attack enters KPN's network in just two of the US locations, you can even enable normal traffic forwarding for all the other KPN PoPs in the US.

You must at least tag your prefix with one of the following triggers. If not, your announcement will be just treated like every other announcements.

Attach one or more of the following communities to whitelist (WL) PEs in PoPs, cities countries and continents, which would blackhole traffic based on your chosen trigger or to just explicitly list PoPs you want to blackhole (BL).
Again: whitelisting takes precendence over blackholing!